"Giving Is Good for the Soul" recounts their academic careers, world travels – and their vision that created the Weiss Urban Livability Program 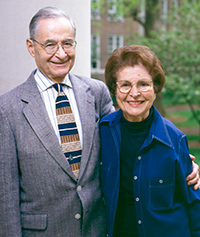 Charles and Shirley Weiss on the UNC-Chapel Hill campus

Even after they had retired from long and distinguished academic careers, Charles and Shirley Weiss were searching for ways to help graduate students make their impact on the world. During a 1992 flight to Charlotte, N.C., a plan came together.

Excitedly, Shirley and Charles began sketching out their idea for an urban livability fellowship at UNC on an airplane napkin.

“We couldn’t just stand on the corner writing checks and passing them out to people that look like students. So we said, ‘Let’s go talk to the dean of The Graduate School. Let’s see if we can set up a program which would provide some sort of a stipend for graduate students,’” Charles explained.*

The “idea on a napkin” went on to become a fellowship program that provides a year of financial support, mentoring, and community outreach and research to first-year graduate students who have an interest in urban livability. Twenty years after the Weiss Urban Livability Program’s creation, The Graduate School is celebrating the lives of its benefactors with the publication of a new book: “Giving Is Good for the Soul: the Life and Legacy of Charles and Shirley Weiss.”

The biography explores the Weisses’ intellectual interests, professional and personal achievements, world travels and philanthropy, as well as the Weiss Urban Livability Program’s many contributions to graduate student success and to meaningful research.

The book’s author, Grace Camblos, conducted extensive interviews with the Weisses, and dozens of other people, and pored over memorabilia. Extensive photography complements the life stories of the two renowned researchers, teachers, arts supporters and world travelers. Shirley became the first female faculty member in the UNC-Chapel Hill Department of City and Regional Planning in 1958. She retired in 1991 and passed away in 2010. Charles was a professor of environmental biology at UNC-Chapel Hill from 1956 until his retirement in 1989.

“Charles and Shirley gave many years of distinguished service to the University, as researchers, mentors and teachers,” said Steve Matson, dean of The Graduate School. “They enjoyed extensive world travels and a close involvement with the arts. In retirement, they brought the wealth of their life experience to the creation of a remarkable fellowship program. They were forward-thinking in their interdisciplinary approach to challenges in our communities.”

The Graduate School held a celebration of the Weiss program’s 20th anniversary and a book signing for “Giving Is Good for the Soul” in November. Those in attendance included University faculty and staff, Weiss fellows and alumni, and friends of the Weisses, among others.

Added Evan Johnson, a Weiss fellow in 2011-12 and senior Weiss fellow this academic year, “The Weiss fellowship has been an absolute cornerstone of my graduate education.”

The book is viewable online, at gradschool.unc.edu/weissbook.

*From “Giving Is Good for the Soul: the Life and Legacy of Charles and Shirley Weiss”

See more photos from this event