One of the key components of the Weiss Urban Livability Program is the call for Fellows to design and carry out a project that will positively impact the surrounding community. More than simply providing benefit to the community, this project is intended to foster academic growth and leadership in the participants, to take advantage of their skills as scholars from a wide range of fields, and to forge lasting relationships, both among Fellows, and within the broader community. Over the years, projects have represented the diversity that is the hallmark of the Weiss Urban Livability Program. 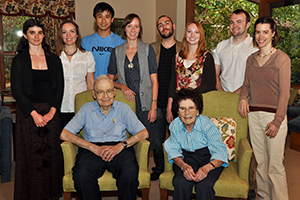 This year the fellows decided to work collaboratively on developing a symposium that they could present to the university and Chapel Hill community more broadly. The Weiss Urban Livability Symposium: Interdisciplinary Approaches to Community Activism through Engaged Scholarship resulted from numerous group meetings and discussions about who to invite as speakers and topics to cover. The fellows decided to bring together a group of university scholars and community professionals to discuss social, economic, and environmental issues of significance to North Carolina and how they engage those issues to solve problems in their communities. They asked the speakers to share how they build relationships between academia and local communities to effect positive change and foster social justice. The event was both photographed and recorded. The final program is listed below.

Gene R. Nichol
Professor of Law and Director of the Center on Poverty, Work, and Opportunity
UNC-Chapel Hill

A reception followed the program.

The 2008-2009 fellows agreed to undertake a unique and important project — telling the story of Drs. Charles and Shirley Weiss and recording the history of the Weiss Urban Livability Program. This project was motivated by our sincere desire to record the inspiring story of the Weisses and the evolution of the fellowship program. In addition, we felt that the extensive collection of photographs documenting the Weisses personal and professional travels should be shared. In collaboration with Dean Sandra Hoeflich, we asked the Graduate School to hire a graduate student, Kristin Deiss, a graduate student in history, who had experience writing oral histories. She conducted a series of interviews with the Weisses to aid in producing a concise monograph.

The fellows participated throughout the project. We invited a professor working at the Southern Oral History Center to speak with us and provide background information about gathering oral histories. One of our main contributions was scanning photographs from the Weisses collection to be used in the monograph and helping to organize their photo collection. Numbering over 40,000 images, we focused our attention on the pictures with the Weisses that we felt would be most appropriate for inclusion in the monograph. Time was devoted to sorting through photographs at several meetings, and we made several trips to Carol Woods to ask the Weisses to identify various photographs and to gather more material. In addition, we researched the Weisses professional contacts at UNC, assisted Ms. Deiss in interviewing several of them, and assisted in the transcription of those interviews.

Although the monograph was not completed during this year, a rough draft of the interviews have been written and the accompanying photographs have been selected.

The 2007-2008 Weiss Fellows developed a weblog to serve as an interactive forum for the fellows to talk with each other between meetings and bat around ideas surrounding urban livability, recent speakers, and group projects. In addition, invitations were sent out to former fellows to join the blog.

With the varied interests in the group, it was decided that more than one project would be appropriate. Thus, the fellows were divided into 3 groups, and each led a project throughout the year. The first group organized donations for an arriving family of refugees from Burma. The second group assisted students in the law school to help support a research project into the effects of the 287(g) bill which deputizes local law enforcement officials to deport of undocumented immigrants. In addition, the fellows volunteered at a conference in April to further discuss immigration policies. The third group decided to split their project into a series of three mini-projects involving local community service, including cooking food for the local homeless shelter, volunteering at the Durham Warehouse Food Bank, and volunteering at Earth Action Day for the Town of Chapel Hill Parks and Recreation Department.

The 2006-2007 Weiss fellows performed a series of community projects. These included: helping the Blue Urban Bikes bicycle sharing program increase its reach to historically underserved populations, protecting areas around the Bolin Creek from invasive species, volunteering at the Food Bank of Central and Eastern North Carolina, helping to set up and organize a job fair through the Blue Ribbon Mentor-Advocate Program, and attending a leadership meeting for Durham CAN (Congregations, Neighborhoods, and Associations). The final report is comprised of a reflection on the projects from each fellow through the lens or his or her discipline and background.

The 2005-2006 Weiss Fellows investigated the topic of home energy efficiency, with a focus on how the issue affects low-income households. They created a final report to describe their findings and to suggest a future research study.

Based on the input from Rusch Hollow's future residents, and the guidance provided by Habitat for Humanity of Orange County staff, 2004-2005 Weiss Fellows worked to design a site plan for a community-oriented recreational space that will contribute to the short- and long-term vitality of the neighborhood. They created this plan with attention to the budgetary and logistical constraints faced by their group, and with particular attention to ensuring that next year's Senior Weiss Fellow is able to turn the plan into reality.

Fellows talked with community members and conducted research in the North Carolina Collection of Wilson Library to discover aspects of local history and unique places in the Chapel Hill/Carrboro/UNC community. They then created a web site that highlights these aspects of urban livability in our local community.

Chapel Hill and Carrboro: A Unique Place to Live

Creation of the Pamphlet “A Guide to Bikeways of Chapel Hill and Carrboro” containing a map of bike-safe routes in the area and a list of bicycle safety tips. A bike helmet collection drive was conducted and the helmets donated to the local police department for distribution to area children.

A Guide to Bikeways of Chapel Hill and Carrboro

A Case study of the recently constructed Southern Village community, a planned, “new urban” environment, using focus groups, surveys, and interviews, and the organization of a community forum, “Southern Village, From Planning to Perceptions” to disseminate information.

A project entitled, “Work and Home: An Urban Livability Study of the University as Community,” in which Fellows went out and spoke with members of the UNC-Chapel Hill campus community about issues of urban livability, public transportation, and community. The community members were also invited to document their experiences in photography that was later displayed in a public exhibition.

A project entitled, “Visualizing Urban Livability at the Turn of the Century,” that distributed disposable cameras to individuals living in a variety of neighborhoods, asking them to photograph aspects that made their neighborhoods unique and interesting places to live. The photos montages for each neighborhood were displayed in a public exhibition.

More than 60 Durham junior high school students were recruited to answer the question “What makes a Good Neighborhood?” using photographs to document the aspects of urban livability in the places they live. The students also discussed the difference that a college education can make. The photographs were displayed at the Durham County Library.